The live-action adaptation conundrum was finally solved by director Ruben Fleischer (zombieland), which cast Tom Holland, Mark Wahlberg, Antonio Banderas, Sophia Ali and Rudy Pankow in the high-flying action-adventure. Chas Jarrett (Logan), with DNEG serving as primary provider, producing 739 shots across 23 sequences, including the single 90-second shot of Nathan Drake (Holland) and Chloe Frazer (Ali) falling from a C-17; recreation of the South China Sea; and giving life to two heavy helicopters each carrying a ship once commissioned on the turn of the 16and century Portuguese explorer Ferdinand Magellan.

The film, released by Sony in theaters on February 18, takes place years before the beginning of the story of the first installment of the series. The screenplay was written by Rafe Judkins, Art Marcum and Matt Holloway, from a story by Judkins. Charles Roven, Avi Arad, Alex Gartner and Ari Arad served as producers.

DNEG’s visual effects teams were led by Vancouver-based VFX Supervisor Sebastian von Overheidt and Montreal-based VFX Supervisor Benoit De Longlee. Early in his career, von Overheidt worked as a composer, which had a huge impact on his continued creative outlook. “Being a composer defines my approach as a visual effects supervisor because I think very early about the final image and not so much about the process to get there,” he says. “In addition, I rely heavily on the specialists who work with me and I feel comfortable doing so. As a compositor, you are used to troubleshooting at a later stage of the plan. 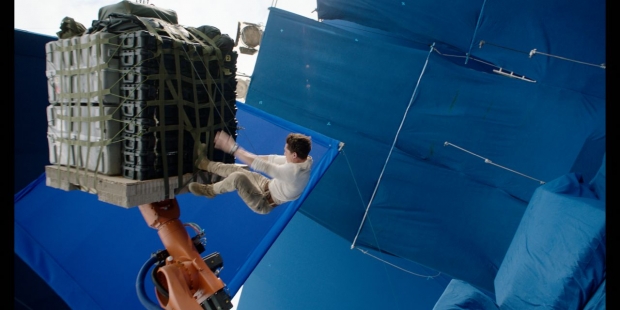 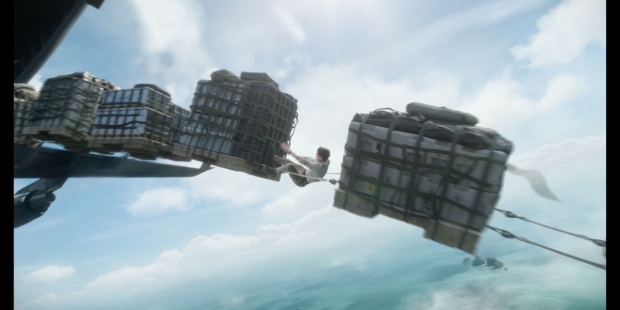 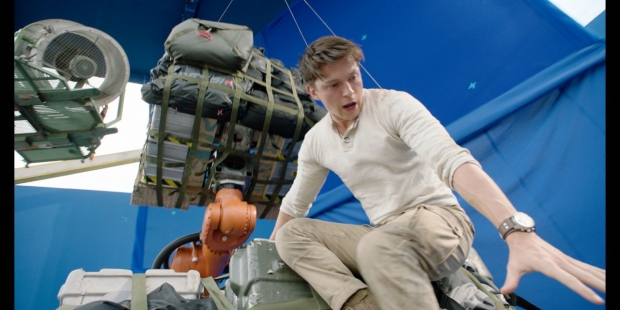 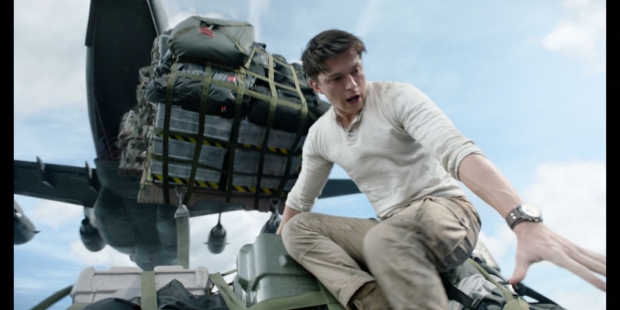 Key to the film’s look was to honor the source material without producing action that felt like a video game. “My affinity for gaming never converged with my visual effects work from an artist’s perspective because I was more rooted in photography and graphics,” von Overheidt shares. “I did some basic research on the game to understand what an in-game demo looks like? Who are these characters? Then I followed my usual approach of finding inspiration by talking to the client, reading the script, looking at the edits, seeing what the art department had come up with, and looking for some cool videos of crazy skydiving stunts. There was some great footage shot in Thailand of the whole South China Sea environment.

Noting that DNEG fortunately didn’t need any custom tools for the project, the VFX supervisor says, “Our Clarisse pipeline is so elaborate and developed that we render with photorealistic depth cueing and hazing, which gave the environments of the third act a fantastic aspect.”

Jarret took care of the principal photography and the filming of the necessary plates. “We had a few conversations with Chas before he went on set, and then we continued to show him our early tests so he could give us updates while filming,” von Overheidt remarks. “It was a close collaboration. When they came back with the footage and I went through it with Chas for the first time, it showed a well thought out filming process. 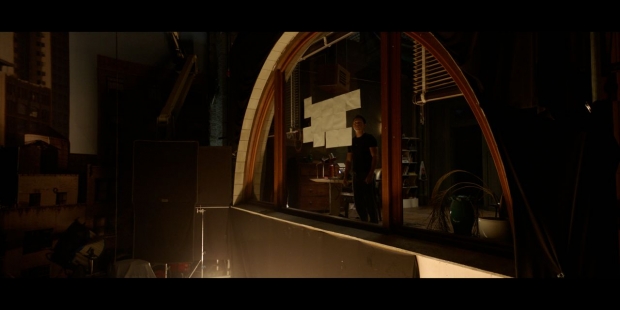 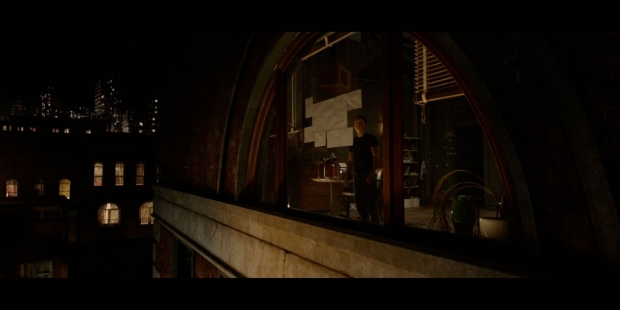 Visual effects plans were split between DNEG Vancouver and Montreal, with each studio working independently of each other and dealing directly with Jarrett. The sequences have been extensively explored in postvis. “We analyzed the footage to see what the stunts looked like, what we needed to animate and retake in full CG, and what shots we would just replace the heads,” von Overheidt explained. “Once the postvis is done [by The Third Floor and RISE], we took that and ran a full blocking pass through all the sequences; from there, things would change in the edit and story points would be refined.

The interior of a C-17 was physically built as an assembly. “The rear end with the ramp was missing; it was all blue screen,” von Overheidt reveals. “We have completed the interior with floating nets and part of the cargo has been replaced. Everything had a simulation that felt like someone opened the door and there was this flow [of air] get through.” A CG replica was created from within, which, according to the VFX supervisor, “allowed us to resort to full CG blueprints or large section overrides.” He also notes that the Tom Holland’s athleticism essentially made him a member of the stunt team, adding: “The crates [falling out of the C-17] were on KUKA robot arms and the entire rig moved on a full gimbal. There were scenes where Tom was doing stunts himself and others were with his stunt doubles. But you could see how their body weight was randomly projected; it looked really good. The digital doubles were produced after principal photography was completed. “You want to know what level of detail is needed,” adds von Overheidt. “Clear Angle scanned all of the character’s beginnings and we were getting bundles of photogrammetry gear with polarized and non-polarized texture references so digital doubles could be built one-for-one.” 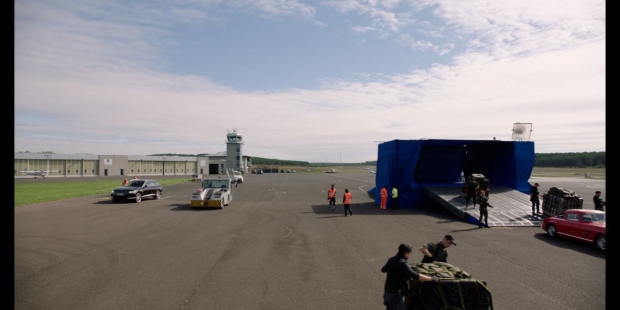 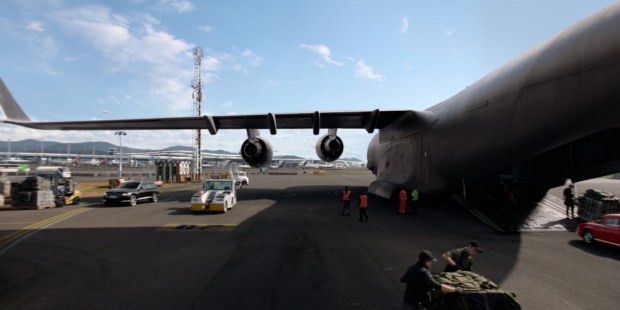 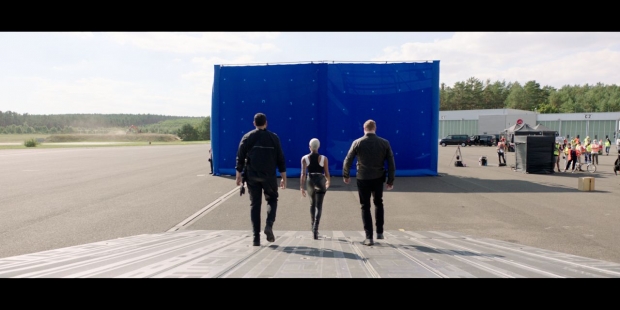 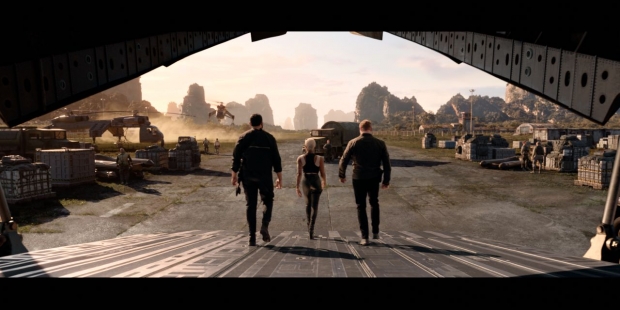 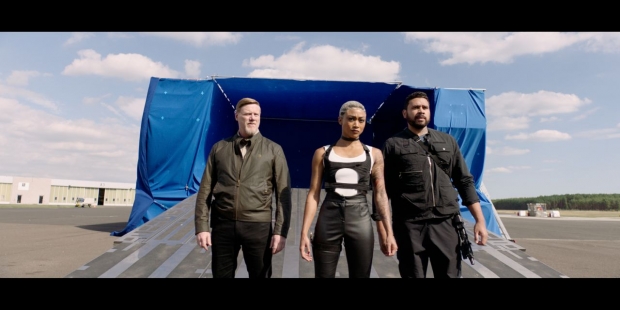 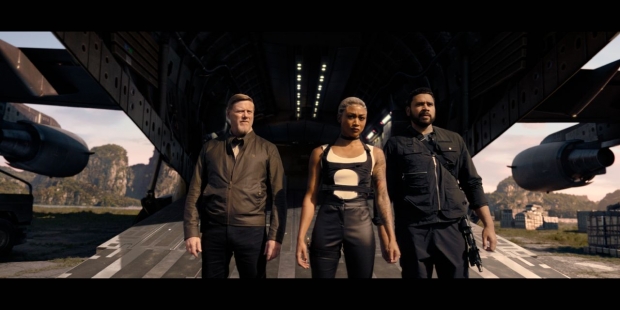 The POV shot of a Mercedes Gullwing flying the C-17 towards the camera was not part of the original shot. “As Ruben was checking out the scene, this shot dropped which was originally supposed to be a POV of Nate looking down the railing,” von Overheidt reveals. “Then all of a sudden it turned into a POV of looking at the car. That shot actually didn’t exist. It’s full CG.

A huge environment created by DNEG was the flight path of the C-17. According to von Overheidt, “You could put the camera anywhere because we knew they were going to play with it for a long time. You wouldn’t place every tree, so it was procedural. We looked at some island types and removed some to fit the flight path. We are setting up sail and cloth simulations as well as sand track effects, but these still needed to be executed on an individual level and each performance would affect its outcome.

In the photo, Nathan and Chloe catch a falling crate from the C-17 as a parachute fires. throughout the entire 90-second sequence, the live actors transition between their digital doubles. “The moment Nathan and Chloe hit the water, they go full CG so we can have a moment where they jump around a bit and refract it all with our water effects,” von Overheidt explains. “The camera dives straight into the splash. The animated crate falls as Nathan and Chloe were shot in a pool while trying to get to the surface. The extra bubbles and underwater night rays have been added in CG. 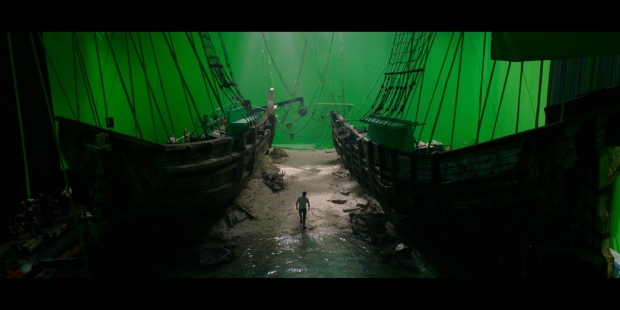 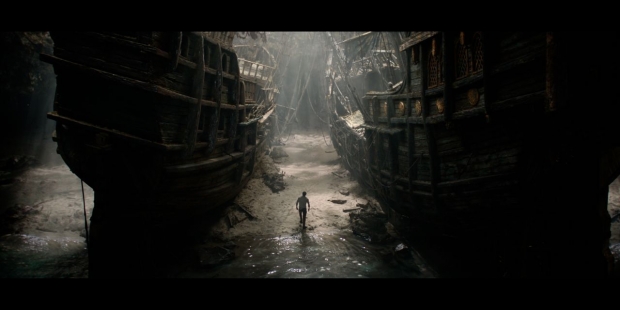 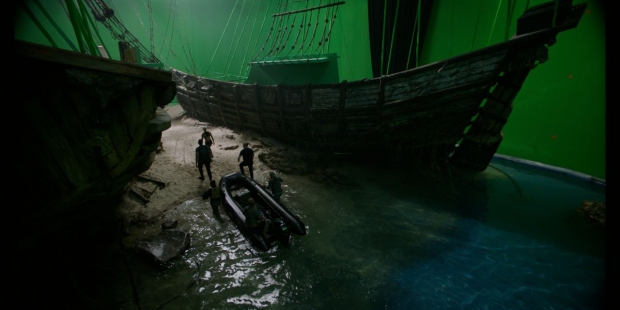 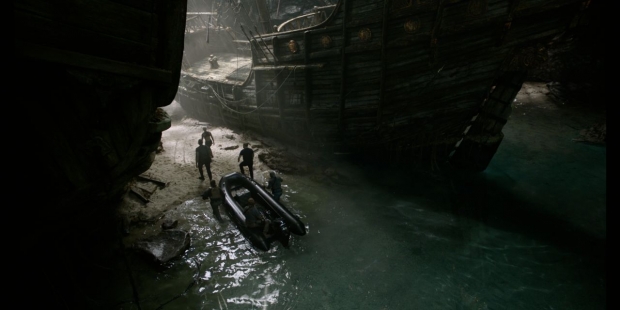 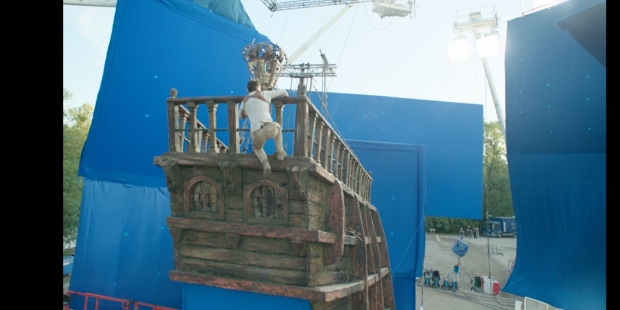 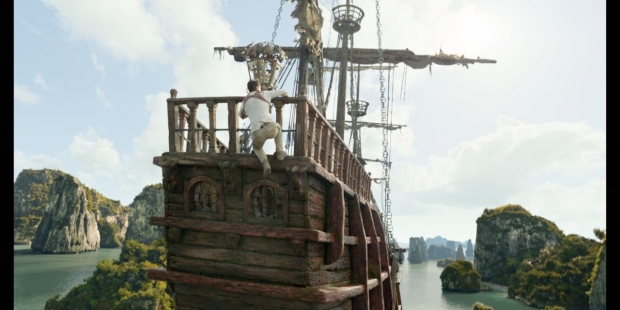 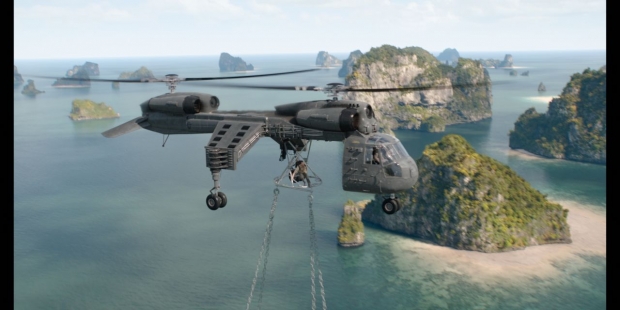 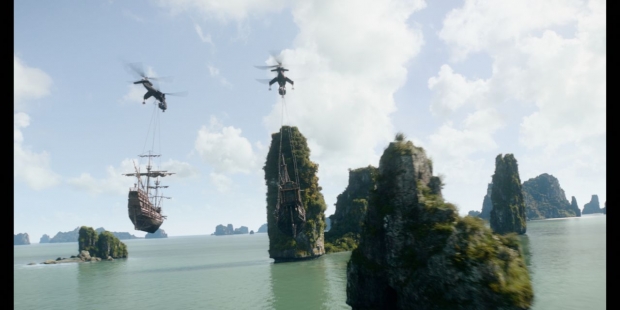 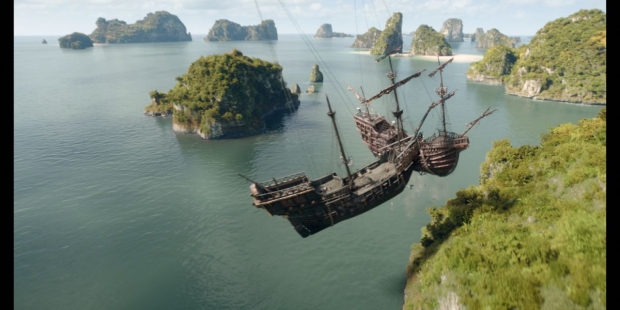 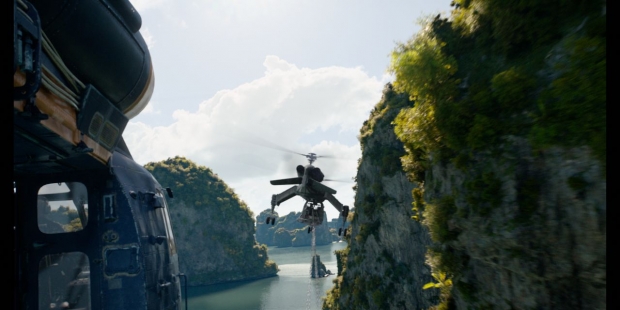 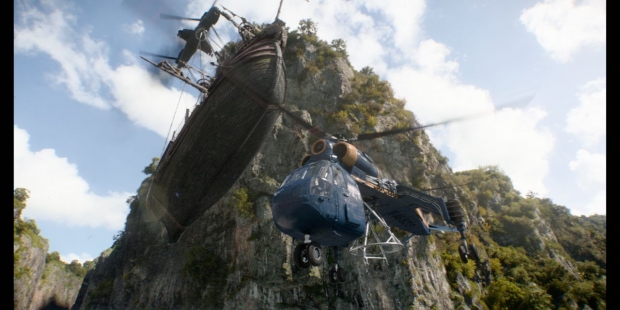 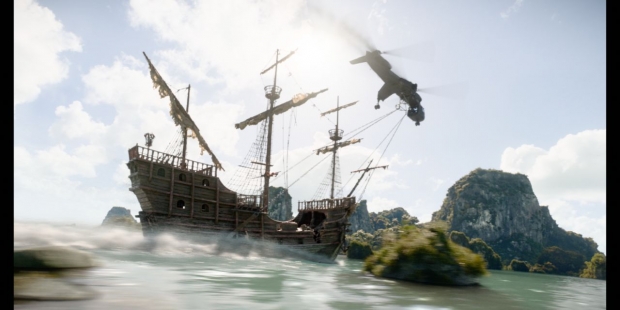 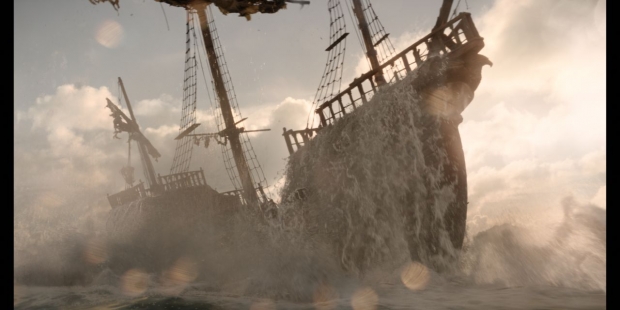 More aerial and combat action unfolds aboard two long-lost 16sand century ships would contain a fortune in gold and would each be transported by helicopter. “We looked at classic heavy-lift helicopters such as the Sikorsky and Chinook and then created an even more robust hybrid version,” says von Overheidt. “We tried to ground the scene in correct physics until it no longer matched the creative intent. At this point it was all about the art of the layout and animation artists trying to make sure we were swinging at the right speed to make the ship look heavy and the helicopter has a bit of drag and lead so that it appears to be clearly affected by the ship and its pendulum path.

Partial sections of ships were built on large sound stages. “The LiDAR was extracted from the sets we assembled in La Concepción and Trinidad,” concludes the VFX supervisor. “One had to be more degraded than the other. We had bits of debris falling from it and some heavy movement. Mercenaries swing on ropes from ship to ship. “We tried to take inspiration from swinging,” he adds. “There were a lot of stunts that we replaced largely with digital doubles.”